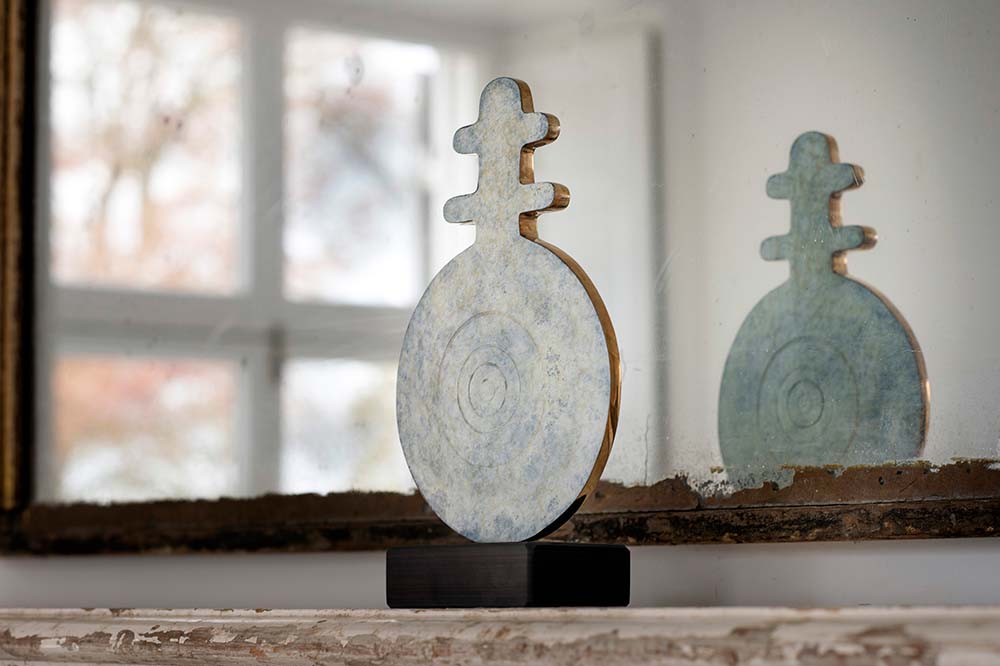 A gentle stroll through the six-acre plot offers an eclectic journey of sculptural and spiritual delight. There’s something around every corner – along the paths and borders, on the formal lawns, and even among the fruit, vegetables, ﬂowers and herbs of the kitchen garden. This is our most successful year to date as this romantic and healing garden set within an ancient landscape has been enjoyed by an increasing number of our most discerning collectors. 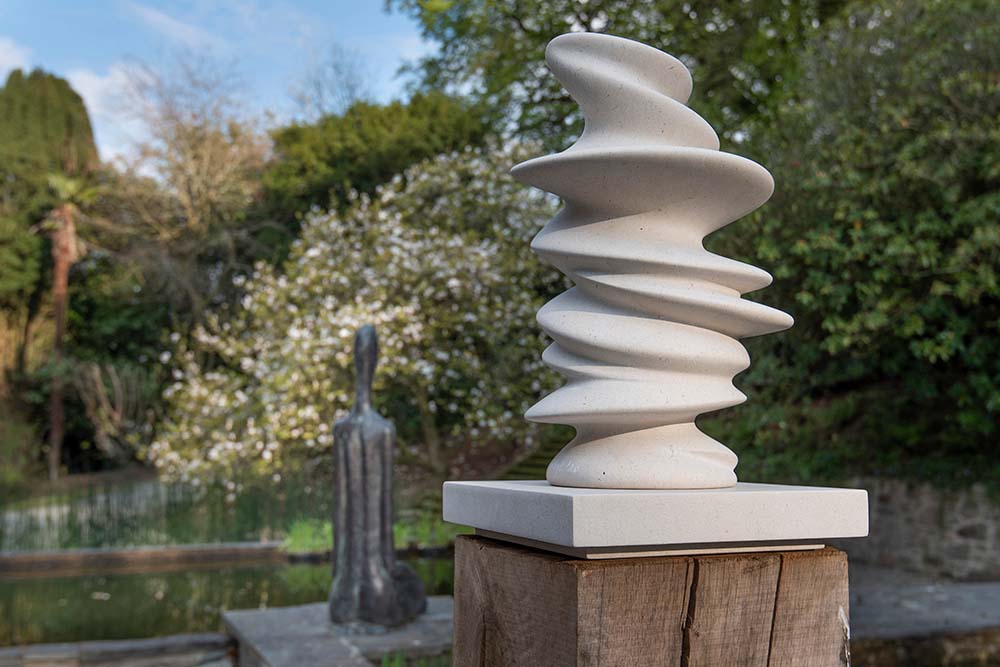 Throughout the day we will proudly be bringing you short performances from: 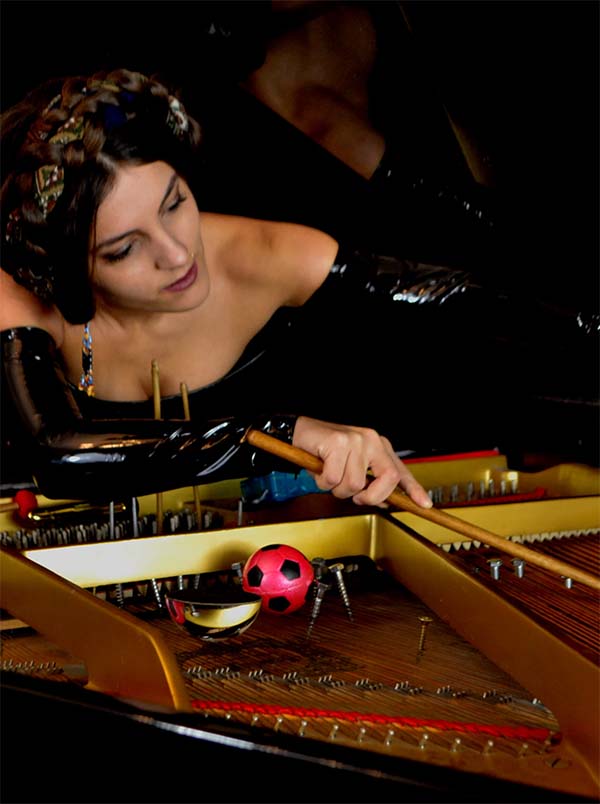 Theatre of Home developed as a duo during the lockdown of 2020. Both musicians combine their primary instruments with percussion, found objects, voice, text, and new technologies to create beguiling improvisations that explore sonic and visual possibilities that can shift from gentle minimalism to psychedelic free jazz and then head off into a sunset of posthuman surrealist joy. They also create short audio-visual compositions in the form of films. This series of short films explore the possibilities of collaborating remotely to create telematic improvised works using technologies such as zoom and specialised audio-visual software and hardware.

Maria Sappho (improviser, pianist, and researcher) is an international performer having played at the Museum of New and Old Art (Tasmania), Glasgow Jazz Festival, Huddersfield Contemporary Music Festival, and is the winner of the New Piano Stars competition. She has worked with numerous ensembles including the BBC Scottish symphony orchestra, the Australian Art Orchestra, the Instant Composers Pool, and is a current member of the Glasgow Improvisers Orchestra. Maria helps with Mopomoso TV, runs the Feminist Free Improvisation archive, and is also the co-editor of the discursive political magazine the-MASS. Maria began as a classical pianist, studying at LaGuardia High School often known for its representation in the ‘Fame’ movies. She then moved to the UK to study at the Royal Conservatoire of Scotland, where she gained both her Undergraduate (hon. first-class) and Master’s degree. Maria has won several awards including the Governors’ Recital Prize and the New Piano Stars competition. She has been supported by the Dewar Awards and Creative Scotland. 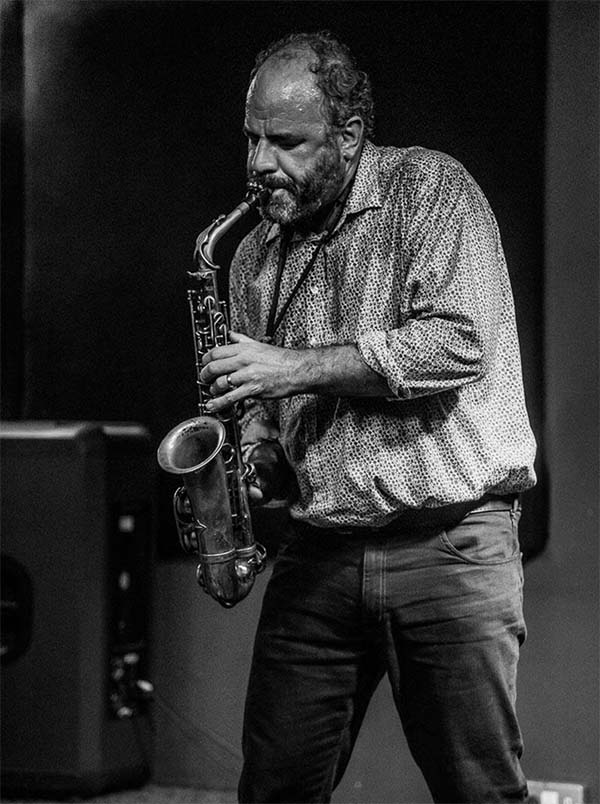 Equally comfortable working in concert halls, galleries, cinemas and non-conventional spaces, Raymond MacDonald is a cross-disciplinary artist working primary in music as a saxophonist and composer. With a particular interest in collaborative creativity, MacDonald’s installations, performances and writing explore the boundaries and ambiguities between what is conventionally seen as improvisation and composition and uses this approach to develop collaborative visual and sonic art-based projects around the world. His work also explores the relationship between creativity and health and wellbeing focusing on how arts activities can sustain and enhance communities. With a background in jazz and pop music, coupled with a passion for film work, graphic scores, free improvisation and visual art, he has collaborated widely and has released over 60 CDs and created visual art based work worldwide, and has also created music for film, television, theatre, radio and numerous art installations. MacDonald has worked with world leaders across the spectrum of contemporary music and art, including Marilyn Crispell, George Lewis, Evan Parker, David Byrne and Jim O’Rourke. He also has an ongoing collaboration, Scarecrows & Lighthouses, with Turner Prize-winning visual artist Martin Boyce and Oscar-nominated filmmaker David Mackenzie.

Live showing in the cellar

Raymond MacDonald and Rachel Joy Weiss have never met, but they have collaborated. In an effort to go headfirst into the ‘shifting tectonic plates of communication’ brought about by the Covid-19 lockdown, the duo decided to explore the possibilities of online improvisation, not only wrestling with hearing each other play for the first time but also wading through the muddy waters of limited perception and spotty internet connection. Initiated by a series of improvisation sessions with Glasgow Improvisers Orchestra, the duo’s online collaboration is in no way intended as a consolation prize; to make it worthwhile, MacDonald and Weiss shot for a performance that would be wholly its own, ‘facilitating new ways of working, seeing and hearing’.

Implementing instrumentation and found objects, Duet for 2 people who have never met serves as a musical representation of ‘nature’s unremitting power to change our lives’, the music playing out as a humble act of resistance against our new enforced environments. The duo refers to it as ‘an innovative strategy to overcome adversity’; consummate improvisers in their own right, they are more than capable of chancing it, framing their free-playing skills as a built-up method of survival. With both artists used to creating new scenarios and inventing projects on the fly, it seems natural that they’d respond to lockdown by making a new connection.

MacDonald and Weiss have had vastly different careers, but they share a fair few experiences in common. Both have traversed a wide range of genres: MacDonald has worked with artists as versatile as post-punk legend David Byrne and experimental artist Jim O’Rourke, while Weiss has flitted between contemporary composition and the pop world, while also drawing on her history as an opera singer. Both are keen to explore the tipping point that exists just beyond composition – the moment where organised sound is manipulated and riffed upon. And both artists are capable of making work that combines and expands on their palette, drawing as much from melodic music as abstract sound. Duet for 2 people who have never met sees them share duties, exploring object-made sound alongside their instruments in a way that is ‘mutually supportive’. Because right now, it’s good to branch out together.

Six other gardens of Withiel will also be open throughout the day. If it’s a nice day bring a picnic, your table tennis bats and maybe a soft football?

This event is open to all our gallery members and is free of charge to everyone, but numbers are limited so RSVP is essential. Bookings can be made via email only. On booking, you will receive full venue details.

Become an LSG Member to stay up to date with all the latest news and information. In addition, Members have exclusive early access to exhibitions.